Top 10 Percent in the Nation for Cardiac Surgery (HealthGrades 2015)

Ranked Number One in the State for Cardiac Surgery (HealthGrades 2015)

Ranked Number One in the State for Cardiology services (HealthGrades 2015)

Ranked Number One in the State for Vascular Surgery (HealthGrades 2015)

Nebraska Heart is an affiliate of Catholic Health Initiatives.

CHI Health is a regional health network with a unified mission: nurturing the healing ministry of the Church while creating healthier communities. Headquartered in Omaha, the combined organization consists of 14 hospitals, two stand-alone behavioral health facilities, more than 150 employed physician practice locations and more than 12,000 employees in Nebraska and southwestern Iowa.

In fiscal 2018, CHI Health invested more than $179.3 million back into our communities. The majority of those dollars went to caring for the poor and underserved.

CHI Health is part of CommonSpirit Health, a nonprofit, Catholic health system dedicated to advancing health for all people. It was created in February 2019 through the alignment of Catholic Health Initiatives and Dignity Health. CommonSpirit Health is committed to creating healthier communities, delivering exceptional patient care, and ensuring every person has access to quality health care. With its national office in Chicago and a team of approximately 150,000 employees and 25,000 physicians and advanced practice clinicians, CommonSpirit Health operates 142 hospitals and more than 700 care sites across 21 states. In FY 2018, Catholic Health Initiatives and Dignity Health had combined revenues of $29.2 billion and provided $4.2 billion in charity care, community benefit, and unreimbursed government programs. Learn more at www.commonspirit.org.

Catholic Health Initiatives and its organizations are Equal Opportunity Employers and support a drug-free work environment.

CHI Health (Nebraska) has implemented a nicotine free work policy and will consider only qualified nicotine free candidates. As of March 1, 2019, cotinine (nicotine) will be added to the list of substances screen for during the post offer, pre-employment testing for all external job candidates offered employment.  A positive result for cotinine (nicotine) will eliminate eligibility for employment. consideration. 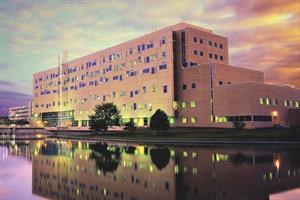