Laughlin Memorial Hospital is committed in providing the highest quality medical services and diagnostic medical equipment for our patients.

This follows the vision Dr. C.B. Laughlin had with the founding of Laughlin Memorial Hospital in 1939. This vision was to always strive to improve upon our ability to better serve the most important people we know... our patients.

Laughlin Memorial Hospital's roots can be traced back to November 1939, when Dr. C. B. Laughlin purchased a large house on North Main Street. Dr. Laughlin then converted the building into a small hospital named Laughlin Clinic. Dr. Laughlin welcomed all physicians who wanted to practice there.

Dr. Laughlin's open staff policy philosophy contributed to the constant growth of the hospital. Additions continued throughout the 1940s and 1950s, bringing the facility's capacity up to 99 beds.

With the change, stockholders were eliminated and all profits generated by the hospital were put into hospital operations to purchase new equipment, enhance facilities and other areas that benefit the community.

In 1978, hospital officials cut the ribbon on a $3.6 million expansion project, which brought the facility's capacity up to 177 beds. Many hospital departments grew.

In early 1995, Laughlin officials opened the doors on a new $26 million hospital facility, which featured many medical services.

The new hospital is approximately 40% larger than the old facility. Its new services include a radiation therapy department equipped with state-of-the-art cancer treatment equipment and expanded outpatient services in the areas of physical therapy, radiology, short-stay-surgery, and emergency treatment. The new hospital also hosts 140 beds in private-room settings.

In July 2006, the hospital completed construction on a third Medical Office Building and the Laughlin Center for Outpatient Care. This $18 million project features an expanded same-day surgery department, outpatient laboratory, cardiopulmonary, and radiology services. Over $8 million in new medical equipment was also installed.

New radiology services introduced as a part of the Center for Outpatient Care in 2006 included a new 64-slice CT (computed tomography) scanning suite which was one of only three nationwide to feature special video imagery and sound, which is selected by patients from among several "themes", to help them relax during their procedures. Other new services include a 3-tesla MRI and Tennessee's first "high field" Open MRI. 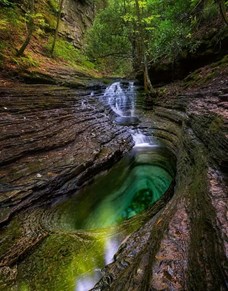