Experience the vibrant and flourishing city of Columbus, Ohio, the 14th largest city in the United States. This culturally diverse and welcoming city offers unique neighborhoods and lifestyles for all. Columbus has received numerous national accolades such as being ranked No. 8 on the “Best Places to Live” in the U.S. by Money magazine and No. 14 nationally on Forbes “America’s Cities of the Future.” Medscape sums it up well: Columbus is No. 5 of America’s “Best Cities for Physicians.” The region’s prestigious educational institutions, high physician compensation, low tax rates, low malpractice payouts, low density of physicians, beautiful landscape, and robust economy convinced Medscape to name Columbus is a top-tier city and community for physicians.

Facility
OhioHealth Doctors Hospital is a community- focused teaching hospital that has been named one of the nation’s 50 Top Cardiovascular Hospitals by Truven Health Analytics, formerly Thomson Reuters.  OhioHealth Doctors Hospital was on the Top 100 list in 2010, 2011 and 2012 in the “Major Teaching Hospitals” category.  Doctors Hospital is renowned for its expertise in emergency care-especially for conditions of the heart. It also stands out among other Ohio hospitals as a premier osteopathic teaching institution, training many of today's best and brightest medical professionals.  This facility provides a complete range of vascular procedures and some of the most advanced techniques in vascular surgery today, including minimally invasive and traditional approaches.

A collaborative approach among physicians and specialists is taken to ensure best possible patient outcomes.  We are a member of the OhioHealth system, which consists of eight member hospitals, nine affiliated hospitals and twenty health and surgery centers. OhioHealth was named one of the nation’s 15 top health systems for clinical performance by Truven Health Analytics (formerly Thomson Reuters).

Emergency Care
The Emergency Center at OhioHealth Doctors Hospital is one of the busiest in Columbus. With a progressive program to fast-track patients through registration, we offer patients reduced wait times and a quicker path to high-quality care.

Our vascular team is dedicated to the evaluation, treatment and correction of circulatory problems and disorders of the peripheral vascular system.

With the second largest osteopathic training program in the U.S., OhioHealth Doctors Hospital trains more than 160 physicians each year, many of whom come from the nation's leading medical educational institutions. Additionally, our cancer care program is accredited as a Teaching Hospital Cancer Program with commendations in clinical research and community education by the American College of Surgeons Commission on Cancer.

OhioHealth is a nationally recognized, not-for-profit, faith-based healthcare organization with 29,000 associates, physicians, and volunteers serving and supported by the community since 1891. OhioHealth services span a 40-county area. Based in Columbus, Ohio, it is comprised of 12 member hospitals, 50+ ambulatory sites, hospice, home-health providers, and an employed physician group employing more than 600 physicians in a wide range of specialties and primary care. For the twelfth consecutive year, OhioHealth was recognized by FORTUNE Magazine as one of the “100 Best Companies” to work for in the nation. OhioHealth has also been named one of the nation’s top 15 health systems for clinical performance by Truven Health Analytics six times – more than any other health system. Additionally, OhioHealth has ranked first or second nationally for the last seven years in Press Ganey’s Physician Engagement Survey.

WE are OhioHealth. As WE grow, so does our belief that people come first. That every patient, no matter who they are and no matter which of our many hospitals or healthcare services they choose, deserves the very best care. WE make this happen by providing that expert, individualized care and sharing the latest knowledge and innovations across the entire OhioHealth system. WE are united. WE are strong. And WE are always moving forward. Join us, and see the difference WE can make. 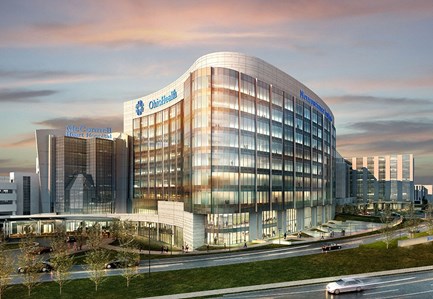 Create a free account to manage your job search and find the right practice.
Get Started
OhioHealth
OhioHealth Doctors Hospital