Community: Jay, OK is located in the Foothills of the Ozarks near the Arkansas, Kansas and Missouri borders, and is also the county seat for Delaware County. The community has a population of about 2,500 people, many having Cherokee Ancestory. Jay is also know as the Huckleberry Capital of the World, and annually celebrates with a festival held the weekend of July 4th. The community is set between two lakes, Grand Lake o' the Cherokees (Grand Lake) being the larger and Lake Eucha. Grand Lake is a 46,000 acre lake that invites many visitors throughout the year and hosts nationally known fishing tournaments and boating activities. Grove, OK, a town of about 6,700,  is the anchor town for Grand Lake and is only about a 20 minute commute from the Sam Hider Health Center. 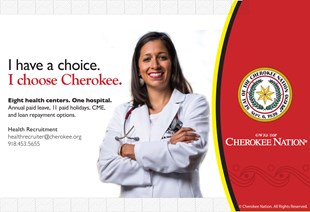 I have a choice, I choose Cherokee
Cherokee Nation
Sam Hider Health Center