UM BWMC opened in 1965 and has continuously grown to become one of the largest and best-equipped medical centers in the state. Our emergency department is one of the busiest in Maryland, serving over 104,000 patients a year.

We performed Anne Arundel County's first joint replacement surgery in 1975, and continue to be an innovator in replacement surgery. We were the first hospital in Maryland to offer the Calypso® 4D Localizing System that uses satellite GPS to zap tumors without damaging the healthy tissue surrounding them.

We underwent a $117 million expansion project that brought an expanded emergency department in summer 2008, a new 111-bed patient care building in January 2009 and a new women's health center with obstetrics services that opened in October 2009 offering a family-like atmosphere filled with amenities for new moms.

In 2009, UM BWMC opened BWMC Health Services at Arundel Mills, a multi-specialty office building that brings physicians, specialists and support care to western Anne Arundel County. And we completed an 18-month, $31 million surgical suite expansion in September 2011, expanding the number of operating rooms from 14 to 17. The rooms allow our surgeons to perform complex surgical cases with the latest technology in neurosurgery, vascular surgery, orthopaedics and robotics. 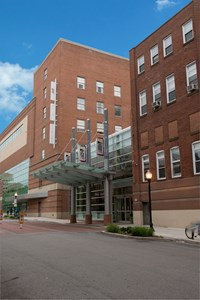